Apple revealed iOS 11, and it promises to give you more control than ever before.

Control Center still features the same tools you’re used to, including flashlight, airplane mode, and AirPlay mirroring. But you can now add a whole slew of new shortcuts and features, and customize the layout to suit your style, and we’ll show you how to do it.

If you haven’t downloaded iOS 11 yet, you can do so in Settings, or by connecting your device to a computer and launching iTunes. Make sure the device is connected to wifi, and that it has 2 GB free. Once you’ve updated, here’s how to customize your Control Center.

First things first, you’ll want to get to know your way around the Control Center. There’s basically two halves to the new menu. The top part contains wireless connectivity settings, music controls, volume and brightness sliders, an AirPlay menu, and toggles for rotation lock and do not disturb mode. The bottom part is where the customizable options are. No matter what you choose to do with the bottom section — and more on that in a minute — the top part is the same for everyone on iOS, and can’t be changed. 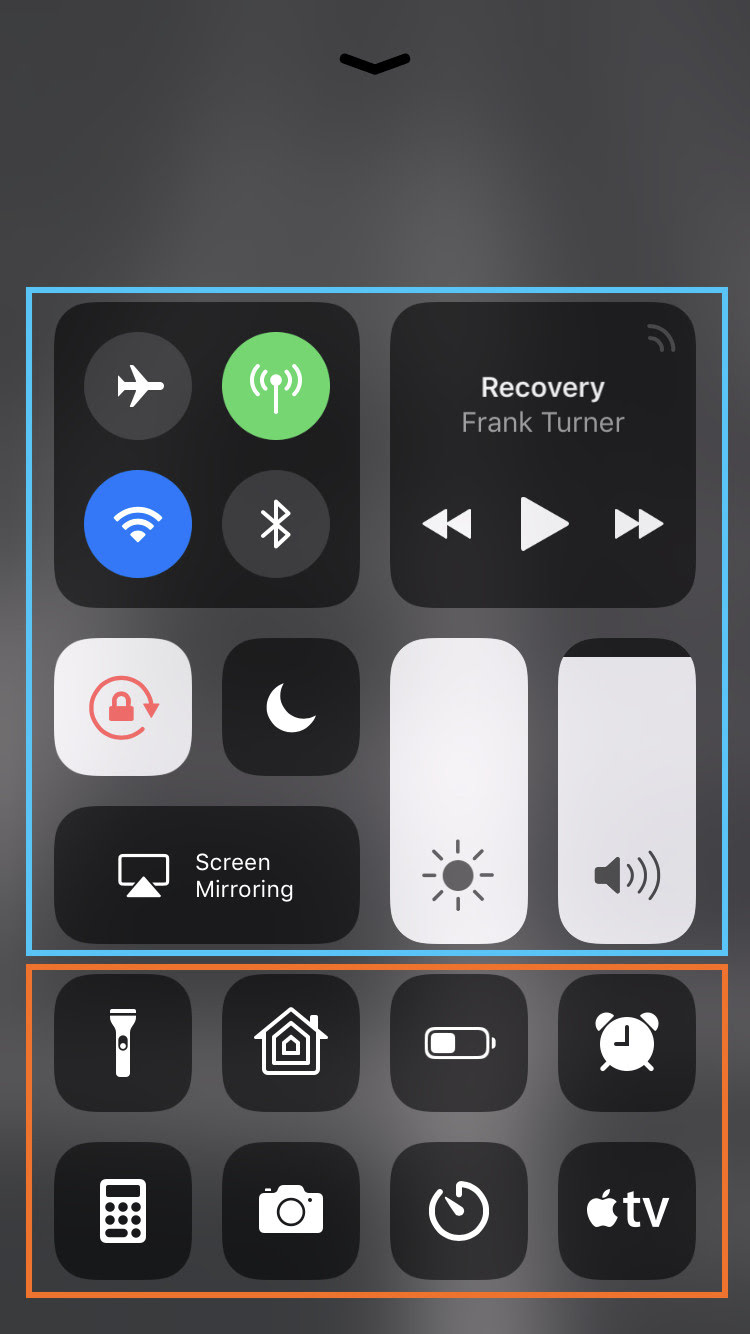 Some of the controls can also be expanded to bring up further options; for example, the music panel pops up more granular playback and wireless audio functions, and the connectivity panel offers more options. But all the buttons that are visible on the un-expanded version also work, so if you just want to pause a song or turn off Wi-Fi, you don’t have to dive into the deeper menu.

To make your Control Center your own, hop into Settings > Control Center > Customize Controls. Under More Controls , press Add Button next to any button you want to add. To remove a button, tap—you guessed it—Remove Button under the unwanted control.

In your control center, press and hold any button to see options for modifying the feature.

There, you’ll be able to add, remove, or reorder additional toggles and application links for your Control Center. Options include:

That’s a ton of stuff that you can add, although adding everything will make your Control Center look kind of ridiculous (and confusing), so consider how sprawling a list you’ll want to have to go through before just adding every single button.

Tap and hold (or 3D Touch) everything

Everything that you see in Control Center is tappable: the brightness and volume sliders, the Wi-Fi switches, and the shortcuts to various apps will all work as you’d expect. But for many (although not all) of the buttons and toggles, you can get an additional useful expanded menu or option by tapping and holding (or on newer devices, pressing down with 3D Touch) on an icon or menu.

For example, the connectivity panel can be expanded to show additional options for AirDrop and personal hotspot by holding down. Or the timer button, where a long press will pop up a slider that lets you start timers directly from the Control Center without opening the app.

So no matter what you choose to go with for your customizable toggles, make sure to try long pressing everything — it’s the best way to discover new Control Center features.

How to Turn On Hidden Nightshift feature in iOS 11