The long-awaited and extensively leaked special edition iPhone is finally upon us, and it’s called the iPhone X (pronounced “iPhone 10”). This new super flagship phone from Apple features an edge-to-edge screen with a notch at the top to accommodate the front-facing camera and new Face ID sensors. It’s also, along with the new iPhone models, one of the first iPhones to support wireless charging.

Apple CEO Tim Cook teased the introduction of the new device with the following words:

“Over the past decade, we’ve pushed forward with innovation after innovation, bringing us to this moment, when we can create devices that are far more intelligent, far more capable, and far more creative than ever before.”

The iPhone X has glass on both the front and the back, and it has “surgical-grade” stainless steel around the sides. It is water-resistant and comes in two colors: space gray and silver. It also has the highest pixel density (458ppi) display ever in an iPhone, with Apple calling it a Super Retina display. It measures 5.8 inches diagonally and has a resolution of 2436 x 1125. It’s the first OLED display in an iPhone, which Phil Schiller explains bluntly: it’s “the first OLED display great enough to be in an iPhone.” Like the iPhone 8, the iPhone X also has True Tone display technology. 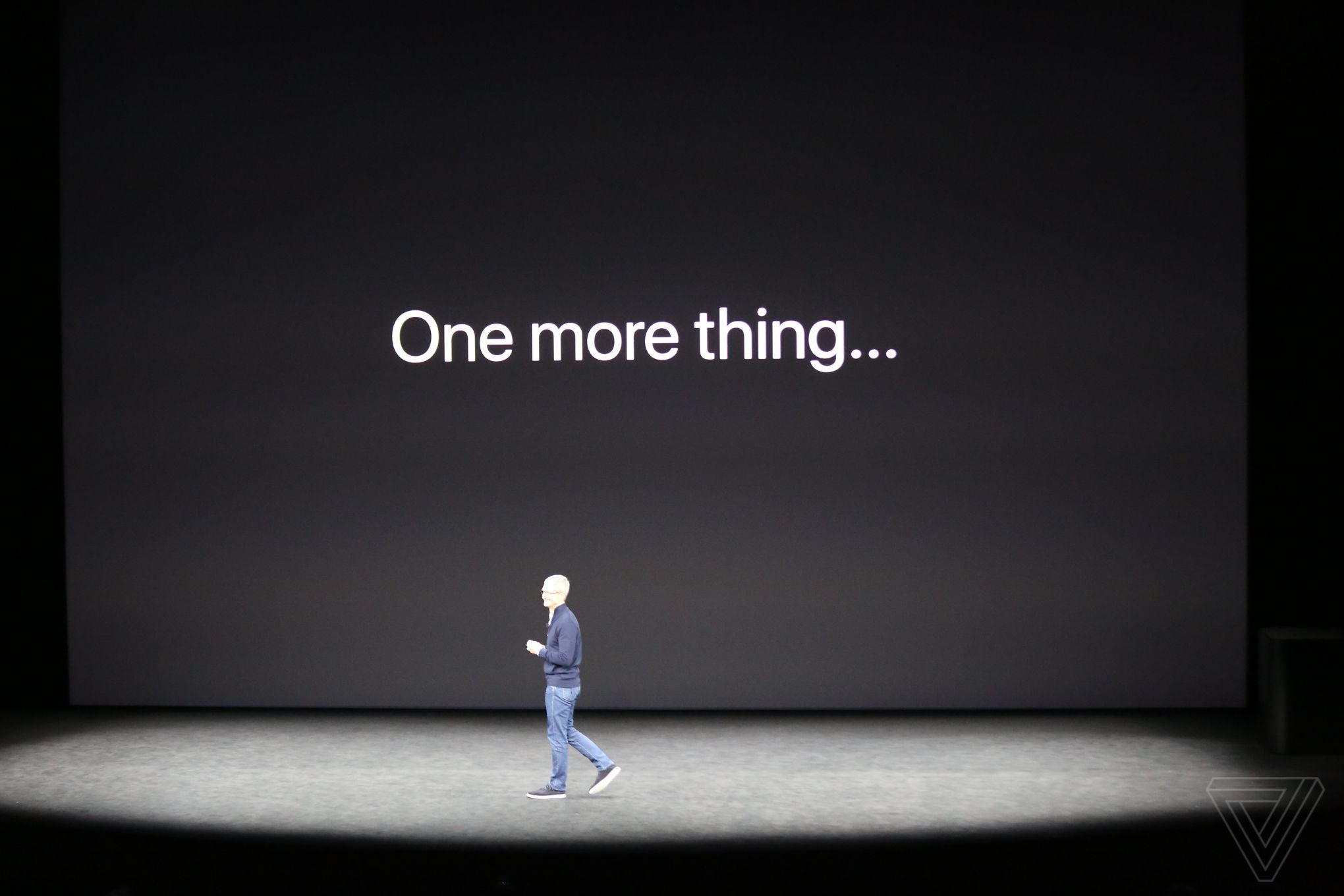 Apple has omitted the home button for the first time, replacing it with an upward swipe from the bottom of the phone. Along with the home button, which used to house the Touch ID fingerprint sensor, Apple is also moving away from fingerprint authentication. The method that replaces it is called Face ID and does what the name suggests: it unlocks the phone just by having you look at it. It’s based on the tech in the notch at the top of the phone: it combines an IR system with the front camera and a so-called flood illuminator that beams a light at your face so it can be recognized even in the dark. Apple even went the extra step of building a dedicated neural engine — based on a dual-core custom chip design — to process face recognition in real time.

Face ID, according to Apple, is orders of magnitude more secure than Touch ID. The company claims a 1 in 1,000,000 chance of another person being able to look at your phone and unlock it through Face ID (with that chance increasing for people that share genetic lineage with the user, so, as usual, be wary of your twin). The new face authentication will also work with Apple Pay and all third-party apps that already supported Touch ID.

Photos and video playback on this new iPhone will both wrap around the notch at the top of the device, which is liable to grow irritating over time. Multitasking will also be something people will need time to adapt to: opening the iOS Control Center, for instance, requires a swipe down from the screen’s top right corner. All the swipe-based interactions have been tried by other phone companies before, with varying degrees of success.

The iPhone X has dual 12-megapixel rear cameras, and it’s equipped with optical image stabilization on both lenses. The sensors are both larger and faster than previous generations, says Apple, and the main camera has an f/1.8 aperture while the telephoto lens has an f/2.4 aperture. In between the two cameras is a quad-LED True Tone flash that is claimed to provide scene illumination that is twice as uniform as previously. The new phone also offers 4K video recording and stereo speakers for better audio playback.

The new A11 Bionic processor that was introduced with the iPhone 8 earlier in the event is, of course, present inside the iPhone X. It has two performance cores, four high-efficiency cores, and the first Apple-designed GPU. So it’s a hexa-core SoC that’s almost entirely designed in-house by Apple, plus the Cupertino company has done a ton to optimize its internal processing and imaging hardware for augmented reality application through its highly promising ARKit framework.

The thing that a lot of people want to talk about with the iPhone X is its $999 starting price, but when you have the phone in your hand, it feels… worth it. The X is an extremely beautiful device, with a stainless steel band and glass back curving into a 5.8-inch OLED display that stretches all the way across the front of the phone. It’s a bigger display than the 5.5-inch Plus-size iPhones, but a much, much smaller body. Those bezels — turns out they’re huge. Happily, the X is also a little thicker and less slippery than the iPhone 7, which was basically suicidal in its ability to fly out of my hands. If anything, the X evokes the original iPhone more than anything, with that stainless steel band and black front. Compared to what Samsung is doing with curved OLED displays on Galaxy devices, it’s very different: there’s still a black border around the display. The phone feels small, but in a different way than, say, the S8.

Apple’s calling this a “Super Retina Display” with 1125 x 2436 pixels of resolution, making it the highest-density screen on any iPhone. It’s super sharp to look at and punchy and vibrant as you’d expect from an OLED screen. It has all of Apple’s signature tech, too, including 3D Touch and TrueTone automatic calibration. I’ve generally preferred LCDs to OLEDs, but the X OLED display doesn’t seem to share any of the extreme oversaturation or pixel matrix weirdness of other OLEDs I’ve seen.

THE SCREEN IS THE STAR OF THE SHOW, AND FACEID ACTUALLY WORKS

The screen dictates everything about the iPhone X’s design, including its lack of a home button. This will probably be one of the most controversial things about the phone among iPhone users, but Apple has done a lot of work to make iOS feel natural without a home button. I couldn’t test out the new FaceID authentication myself without setting it up, but it was configured for one of Apple’s demo assistants, and it worked every time he showed it off, even under the frenetic conditions and bright lights of the demo area.

FaceID works because of the TrueDepth camera system that’s tucked into the display notch at the top of the phone — there’s a lot of sensors packed in there, including a IR depth camera and a projector that throws 30,000 infrared dots on your face. The systems reads the map, matches it against the stored image on the phone using a neural network processor built into the phone, and unlocks the phone. Apple says it won’t work if you’re not paying attention, and sure enough, the phone wouldn’t unlock when the demo assistant had his eyes closed. When he opened his eyes, the phone quickly unlocked. It was pretty impressive.

Apple says the system learns your face, even if you’re wearing glasses, a hat, or change your hairstyle. And importantly, it says the system can’t be fooled by a photograph of you. Overall it’s all much better than the face-unlock systems we’ve seen on other smartphones, but we’ll have to really test it out in harsher conditions. And try to fool it, of course.

The iPhone X supports Qi wireless charging, the same standard supported by the new iPhone 8 models as well as the latest flagship devices from Samsung and LG. With such universal agreement among the biggest smartphone vendors, there’s finally a chance for unified wireless charging standard to take root and penetrate into more public spaces and locations. In support of that push, Apple today also announced a wireless charging pad to unify the wireless charging of all its mobile devices, and it calls this overall system AirPower. The AirPower charging pad will be available next year.

Also on the wireless front, the iPhone X supports LTE Advanced and the Bluetooth 5.0 standard, just as the Samsung Galaxy S8 and OnePlus 5 have earlier this year. There are still no real gadgets or accessories that you can use with a Bluetooth 5 phone, but the more phones there are that support it, the more impetus there will be for compatible peripherals.

List of Devices to get the Android 8 Oreo Update