Jio Phone beta testing finally started on August 15, but the official date to pre-order the 4G feature phone is still a few days away. However, certain offline retailers have started taking Jio Phone bookings ahead of schedule, detailing the booking process, document required, and tentative delivery dates. The handset itself will hit the market for the public in September, with the company aiming to deliver 5 million units every week to consumers across the country. For those unaware, Jio Phone bookings can be made online and offline from the MyJio app and authorised offline retailers, respectively. Here’s everything you need to about the registration process.

A retailer claiming to be an authorised Jio retailer and taking Jio Phone bookings offline ahead of the official date. The retailer said the phone booked now will be delivered between September 1 and September 4, and you will need a copy of your Aadhaar card to pre-order the device. Only one unit will be allowed per Aadhaar number.

If you want to book more than one Jio Phone, you can place the pre-order in the name of your business. To do this, you will have to give your organisation’s PAN or GSTN number as the business owner. You will be able to specify how many units of the phone you want to purchase, with the highest tier being ’50 & Above’ for bulk orders. Once you register your details, you will receive the details around Jio Phone launch on your mobile phone via SMS, and on email. 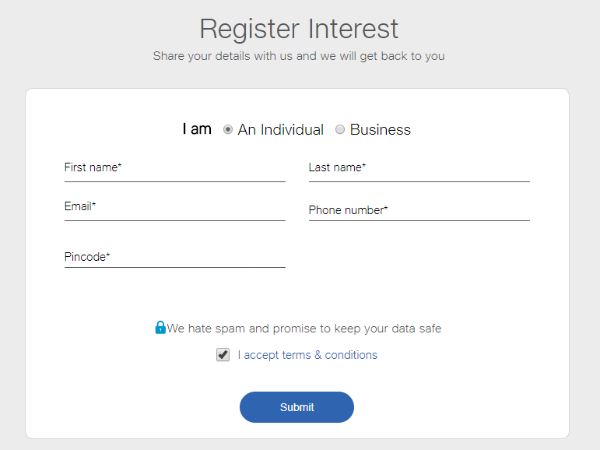 Till the Jio Phone bookings officially open, you can sign up for updates on the Jio.com website by clicking on Keep Me Posted and filling the required details. The company says it will deliver the 4G feature phone on first come, first serve basis. More details are expected to come as the release date draws near.

Jio Phone is free, according to Reliance Industries Chairman Mukesh Ambani. Nevertheless, it requires the user to make an upfront payment of Rs. 1,500, which is refundable after three years. Regarding the Rs. 1,500 security deposit, he had said at the AGM, “The security deposit is necessary to avoid any potential misuse of data.” The offline retailer taking pre-orders for the device says the sum needs to be paid only at the time of delivery, not while making the booking. 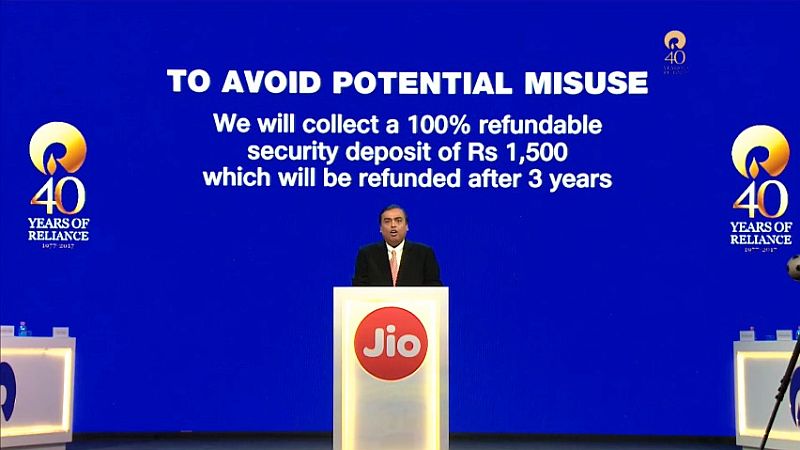 To recap on the Jio Phone, the entry-level phone will come with unlimited voice, data, and texts. Customers will have to recharge with a Jio Dhan Dhana Dhan monthly pack of Rs. 153, which will give them free voice, texts, unlimited data (high-speed data capped at 500MB per day), and free access to Jio apps for 28 days. At the 40th AGM, Ambani also announced an accessory “Jio Phone TV-Cable” that will allow users to connect their phones with any kind of television sets. For connecting phone to TV, users will have to recharge with Rs. 309 per month pack for large screen.

Talking about Jio Phone features, the device comes with an alphanumeric keypad, 2.4-inch display with QVGA display, microSD card slot, torchlight, FM radio. It will be a single SIM handset that works only on 4G VoLTE networks. The phone supports voice commands and 22 Indian languages, and has a panic button as well. A short demo of the voice command feature on Jio Phone was showcased during the keynote presentation where the device was able to play music via Jio Music. Additionally, the handset will also come with a panic button that is enabled when long-pressing the number 5. Moreover, the Jio phone will come with advanced NFC support for digital payments that will be rolled out to users via OTA software upgrade. Qualcomm and Spreadtrum have confirmed their chips power the new feature phone.

The phone does not have WhatsApp support at the moment, though we did catch glimpse of a web browser, Facebook, and PM Modi’s Mann Ki Baat broadcast during the unveiling at the Reliance AGM.

According to analysts, Reliance Jio aims to reach another 100 million users with its new feature phone; this will be in addition to the 125 million users that already use the Jio telecom network. Moreover, the 4G VoLTE-enabled feature phone will completely change the low-end phone segment and bring about a new era of innovation in this segment. On the other hand, industry body Cellular Operators Association of India (COAI) has termed the Rs. 0 pricing a clever marketing move by the company and attempt to save government levies like licence fee.

Android O (8) is launching today: Here are 10 things you should know
Scroll to top