Samsung has officially kicked off Android 8.0 Oreo update beta program for its Galaxy S8 and S8+ smartphones and even confirmed the rollout for the Galaxy S7. The South Korean phone maker hasn’t revealed which of its other devices will get the Oreo update. Samsung has never been transparent about the Android updates, though it is a known fact that its flagships usually receive updates for two years or so. Now thanks to a new leak, a list of Samsung Android devices that will allegedly get Oreo update has popped up on the Chinese social media site Weibo. While there’s no way to authenticate the list, but a well known Samsung tipster “Ice Universe” is said to have leaked the list.

As per the list, a total of 36 Samsung devices will be updated to the new Android 8.0 Oreo software. The long list contains most of the 2017 Galaxy A series as well 2016 flagships such as Galaxy S6, S6 Edge, and S6 Edge+. Many Samsung tablets are also touted to receive the Android Oreo update.

Moreover, the list contains the name of some of the unannounced 2018 Galaxy A series smartphones. The Galaxy A3 (2018), Galaxy A5 (2018)and Galaxy A7 (2018) will apparently come with Android Nougat at launch but will receive Oreo at some later date. 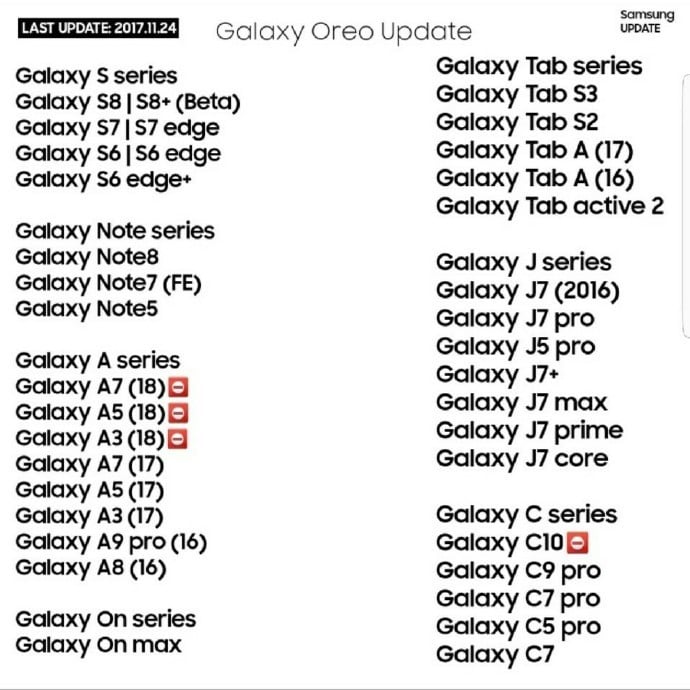 The latest leak is in line with gsmarena’s new report suggesting that the Galaxy S6 and S6 Edge will receive the Oreo update. A Reddit user CyberConCoder said that four Samsung chat representatives have confirmed the Galaxy S6 will get the Android 8.0 update. The user provided screenshots of his discussion on the social media platform.

Though they did confirm the Oreo update, Samsung employees refused to mention the ETA of the Android 8.0 version. If it indeed turns out to be true, it would be great news as Android makers rarely support older gen phones. Stay tuned for more on whether your Samsung device will receive Oreo update.

What are NEFT, RTGS and IMPS? Here you know about these cashless payment me...

Introduction to the Linux Operating System
Scroll to top
Translate »